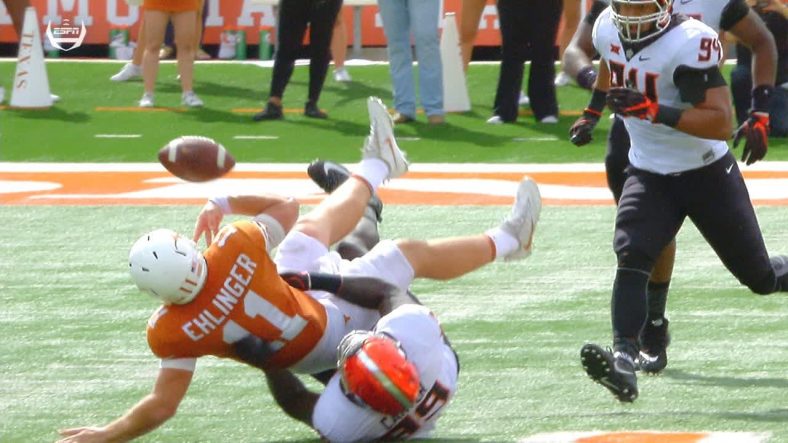 The Texas Longhorns will travel to Morgantown for Saturday’s huge conference game against the West Virginia Mountaineers.  With a 3-1 record and ranked 11th in the country, the Longhorns come to Touchdown City hobbled and with several key players out.

The Texas secondary has been absolutely decimated with starters Josh Thompson, Jalen Green and Caden Sterns out for multiple weeks.

Multiple sources confirmed that Junior  defensive back Josh Thompson has a broken foot and was required to have surgery yesterday.  Thompson will likely miss 8-10 weeks with the injury.  Thompson was injured in the Longhorns’ last game against the Oklahoma State Cowboys and his season may now be over.

Horns247 reported that Jalen Green, a Sophomore Cornerback, will miss approximately a month with a dislocated right shoulder, which he also suffered against Oklahoma State.

In addition to Thompson and Green, Texas will also be without Caden Sterns, a Sophomore Safety who suffered a sprain to his “tib fib ligament” and will be out for four weeks.  This same Texas defense currently ranks 110th in the country and gives up 314.5 passing yards per game during its first four games.

According to their official injury report, Texas will have 8 total players rule as out for the game, 1 Doubtful and 5 players Questionable and their starting quarterback, Sam Ehlinger, is listed as Probable.  Ehlinger has struggled with a lingering injury to his ribs and is expected to start against West Virginia, but has been limited during practice.

According to Longhorns Wire, “Wide receiver Collin Johnson is expected to practice this week, but his availability for Saturday is still up in the air. Johnson has missed the previous two games with a lingering hamstring injury, which he irritated in the big matchup against LSU.  Along with Johnson, sophomore safety DeMarvion Overshown has also missed the previous two games while dealing with a spine issue.”

Although Texas is loaded with four and five star talent, many of these players are very young and inexperienced at the college level.  Make no mistake, this is an ailing team and Tom Herman will be forced to count on reserves and young players, particularly in the secondary against West Virginia.