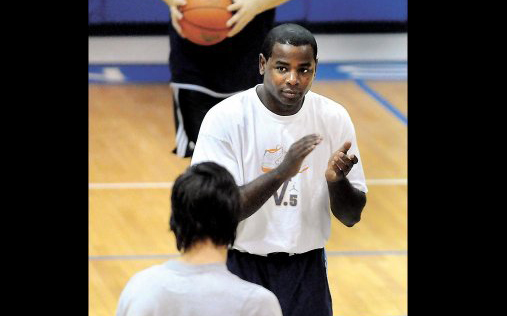 Mountaineer Sports:  Thank you for joining us today, Coach Bruce.

Arkell Bruce:  I’m great, thank you for inviting me!

Mountaineer Sports:  Can you tell us about some of the players on your current roster?

Arkell Bruce:  Sure, we have Zach Loveday, a 7 footer from Gallipolis, OH, a pick and pop kind of player.  He’s very skilled, can run, very athletic, four star recruit with offers all over the place.  Jaemyn Brakefield, a 5 star guy from Mississippi, he’s a top 20 recruit, he’s been here since the 9th grade, very versatile, can guard multiple positions.  We have JT Thor, who is a top 10 Sophomore in the country, 5 star recruit, from Alaska, which is a long way from home.  He’s also very versatile, a lefty, extremely athletic, slender, but really, really, really talented kid.  AJ Hoggard, a pitbull of a point guard, 6’3 and about 210, he really had a great year for us and is a four star point guard out of the Philadelphia area.  Dudley Blackwell from Fort Lauderdale, a 6’6 2-3 man, an elite passer, great feel for the game, shots better than people know, plays a little at the point, just a very skilled player.  Josh Primo, top 40 recruit, 4 star guy out of Canada, about 6’5, high level shooter, really good athlete.   We also have a few young guys in Dontae Stringer and Kok Yat, both about 6’7, versatile, big-time shooters, that will soon be high on the radars.  We’ll add to that, but I can’t say names right now.  We’re really excited for the upcoming year.

Mountaineer Sports:  How do you attract this level of talent to Huntington?  Do you go out and recruit them or do they contact you?

Arkell Bruce: We go out and recruit at different AAU events.  We try to get guys that fit what we like to do.  We like players that can play a lot of positions and can shoot the ball and do different things on the court.

Mountaineer Sports:  What other players around the state have impressed you?

Arkell Bruce:  The McNeely kid, the Freshman from Poca.  He’s really, really talented.  David Early from Logan is talented, he’s very strong and powerful and he’s a skilled guard.  Of course Obinna in Chapmanville.  He’s long, athletic, can guard 2-3-4 positions on the court.  He does a lot to benefit his team.  I haven’t really looked at a whole lot in state.  I’m excited for my nephew Amari Smith to come back to Huntington High, he’ll help them tremendously, he’s a 6’4 shooting guard and is one of the top players in the state.

Mountaineer Sports:  Have you met Bob Huggins and what’s your relationship like with him?

Arkell Bruce:  Yeah, that’s my guy.  I know him pretty well, we’ve been to dinner a few times and have a great relationship.  I love what they do with Press Virginia and it’s fun to watch.  They have some really talented young talent coming in and some guys coming back that have some experience under their belt that will help them improve next year.

Mountaineer Sports:  Do you think there will ever be a Huntington Prep to WVU pipeline?  How can we make that happen?

Arkell Bruce:  Well, there are a lot of people involved with kids nowadays.  Some have handlers, some parents are very involved with it, there’s a lot involved.

Mountaineer Sports:  Are any of your current players interested in attending WVU?

Arkell Bruce:  Yes, Jaemyn Brakefield and AJ Hoggard.  They’ve offered Brakefield already and they will be offering Hoggard soon.  Both are interested.

Mountaineer Sports:  Thank you so much for speaking me with me today and good luck, Coach!

Arkell Bruce:  Absolutely, anytime you or any of your readers are in the area come see us play!