Why Aren’t Will Grier And David Sills Getting Heisman Consideration? 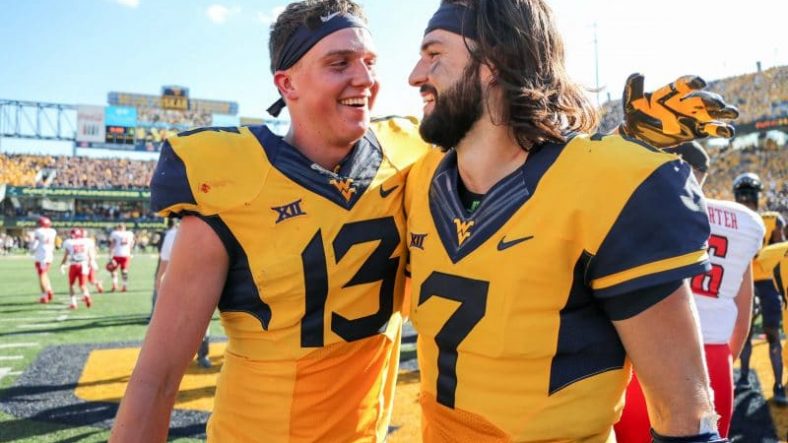 As the season rolls along the Mountaineer passing attack is on a record pace. This begs the question: Why aren’t Will Grier and David Sills getting Heisman consideration?

WVU grinded out a win over Baylor that was much tougher than expected. The Mountaineers were shut out in the fourth quarter while Baylor piled up 23 points. WVU’s offense went into the tank and the defense had some iffy play calling. The defense made a huge play when they stopped a 2-point conversion to seal the victory.

Besides the fourth quarter the offense was on fire. For the third time this season Will Grier threw for over 300 yards and five touchdown passes. Top Grier target David Sills went off with 7 catches and 136 yards along with three touchdowns.

Despite constantly piling up video game numbers Will Grier and David Sills aren’t getting a whiff of Heisman consideration.

Just a few weeks ago Sills was added to the Biletnikoff Award watch list. Sills was very deserving of this. The former quarterback leads the nation in touchdown catches with 15. Him and Grier have developed to an unstoppable force in the passing game and a huge part of WVU’s success.

Will Grier has led the Mountaineers offense to big things all season. He erased any doubts right at the beginning of the season and has been rolling ever since. All seven of Grier’s starts have resulted in 300 yards or more passing. He also has 2,467 yards passing and completes 66.7% of his passes. Not Geno Smith, Pat White or Major Harris were able to throw for five or more passes in consecutive games like Will Grier did. Those players all received mention as Heisman candidates.

It’s very peculiar that Grier particularly is not getting Heisman consideration.

With the numbers Grier has been putting up all season he has been one of the best quarterbacks in the country. Especially with other quarterbacks such as Lamar Jackson and Sam Darnold not meeting expectations, you would think Grier would be getting serious consideration.

The front runners for the Heisman are running backs Saquon Barkley of Penn State and Bryce Love of Stanford. Big 12 quarterbacks Baker Mayfield of Oklahoma and Mason Rudolph of Oklahoma State are also getting consideration. You have to go way down the list to see Will Grier on the ESPN Heisman Watch.

This weekend WVU has a big home game against the Oklahoma State Cowboys for a showdown between ranked teams. This game is a great opportunity for the Mountaineers to make waves and hopefully get the national recognition they deserve when it comes to the Heisman talks.