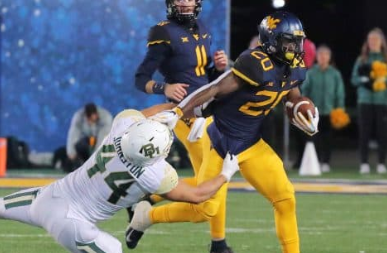 With the season drawing near, the WVU football team is fired up to get the season going. Count Alec Sinkfield in that crowd. The Mountaineer running back said if he were able to see more time as a receiver that could be a “blessing.”

“I’m here to play football regardless of what position it is,” Sinkfield said.

“Whatever the job is at hand I gotta tackle it.”

.@SinkfieldAlec came to @WVUFootball as a running back, but he could see more time as a receiver this year. To him, that could be a "blessing." pic.twitter.com/z8KJ5rKdY9

WVU running backs coach Chad Scott had high praise for the leadership skills of Alec. With the Mountaineers bringing back four running backs with experience, this might not be the running back you predicted he would call out for a leadership role.

“I like Sinkfield. You know Alec Sinkfield’s been pretty consistent throughout this whole camp. Even today. He’s one of the guys who was a bright spot for us, made some plays. He’s not too young to lead.”

Take a listen to what Scott had to say about redshirt sophomore Alec Sinkfield and his potential to be a leader.

Running backs coach Chad Scott is looking for players to step up and lead, and he calls one guy out to help fill that role ⬇️ pic.twitter.com/QBx2yKwDzC

One thing to note is when a new coaching staff comes in the slate is clean for everyone for better or for worse. And it’s not like the previous coaching staff didn’t think highly of Sinkfield. Last year spring camp was buzzing about the abilities of the running back.

Holgorsen and his staff also thought enough of Sinkfield to give him a start vs Youngstown State.

“When he runs, it jumps off the tape,” former offensive coordinator Jake Spaivtal said of Sinkfield, per EerSports.com.

If not for injuries there is a great possibility Sinkfield could have played a much bigger role on last year’s team.

When WVU released their first depth chart of the Neal Brown era, the four running backs had an or between them. This means there is no clear-cut starter and they are all co-starters. Though if most Mountaineer fans were to pick one guy that would be the least likely to start they have chosen Sinkfield. Judging by his coach’s assessment of him that may have been a mistake.

The offense was somewhat excited after winning today’s competition drills to open practice. That’s Alec Sinkfield with the grab from Jack Allison. pic.twitter.com/kWarQW7Ae5

Alec is a very talented back and it looks like the new coaching staff is taking notice of it. It appears that when all four backs were listed as co-starters it genuinely meant it’s wide open as to who gets the carries. Sinkfield was named one of the recipients of the 2019 Iron Mountaineer award back in April, so the coaching staff has been taking notice of him for some time.

How Bad Did the Buffalo Bill Want David Sills V?

Is Austin Kendall the Man?

Neal Brown Gets It

It will be interesting to see what kind of role Alec Sinkfield plays in the opener against James Madison. Obviously Chad Scott has high hopes for him to not only carry the ball, but also help lead this young team.