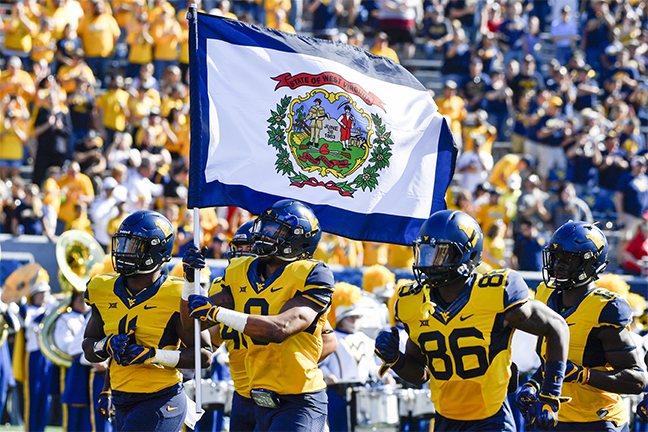 Team members run onto the field carrying the state flag of West Virginia before the start of Homecoming action against Texas Tech Saturday, Oct. 14, 2017. WVU came from behind for the victory.

Patrick White is one of the greatest players to ever wear the gold and blue. He’s also from Daphne, Alabama, the same area that newly-hired Director of Player Personnel Brian Bennett hails from. In fact, Bennett had the privilege of watching White play high school football.

In an interview with MetroNews, Bennett described White as “one of the most incredible athletes I’ve ever seen.” As a high school player at Daphne, White was coached by the great Steve Savarese. After White graduated, Savarese left for McGill-Toolen, a high school in Mobile, Alabama, and where youngster Brian Bennett attended/played.

The connection to a former Mountaineer great is one thing, but Bennett’s passion for football is another, more deeply-rooted aspect of his persona. He’s been involved in football “in some form or fashion” since the age of five, said 30-year-old Bennett. After a spinal cord injury put an end to Bennett’s playing career at Birmingham Southern College, he encountered an amazing break when he was hired by the school to be a student assistant. This would mark the beginning of Bennett’s career in football as a businessman.

After two years as a student assistant at Birmingham Southern, Bennett was able to connect with then defensive coordinator Charlie Strong who brought him to the University of Florida to serve in the same role. Strong would turn out to be a career advancement catalyst to Bennett, as Bennett followed the newly-crowned head coach to Louisville in 2010 for four seasons as an assistant, and again to Texas in 2014. It was here in Bennett’s journey that Coach Neal Brown came into the picture.

Bennett got the call from Coach Brown to interview for the new director of player personnel position at Troy University in 2015. Bennett fell in love with Coach Brown as a person from the beginning, describing him as “really genuine guy.” Bennett went on to serve his position at Troy for four years, managing recruiting classes that topped the Sun Belt conference and producing 10 or more wins in each of the final three seasons.

What about now, at West Virginia? What is Bennett’s vision for Mountaineer football? As WVU’s recruiting authority, along with coordinators Scott Casper, Casey Smithson and Katie Giusto, Bennett believes that West Virginia can be as successful in the Big 12 as Troy has been in the Sun Belt. Major recruiting selling points in Bennett’s mind include West Virginia’s passionate fan-base, the familial/communal atmosphere and the Big-12 style of play.

Regarding recruiting areas, Bennett says he’s “not willing to lose guys in-state anymore.” Different from past recruiting strategies whereby one person was in charge of the entire state, Bennett has assigned many assistants to different cities in West Virginia for this purpose. “This state is full of a bunch of proud, hard-working people and we need those type of people in our program,” says Bennett. Bennett adds that the staff plans to “heavily recruit between 14-16 states.”

Yeah! Excited to welcome you to the #TakeMeHome19 class! https://t.co/MENjD6mT4k

Echoing Coach Brown’s public sentiments, Bennett says “We’re going to be a really good football team, [I’m] just not sure when.” The uncertainty of “when” has to do with the production West Virginia lost, such as Will Grier, David Long, David Sills and Gary Jennings. Even still, Bennett remains optimistic for what’s to come for this team.

Adding to his West Virginia connection, Bennett says one of his first player evaluations at Troy was of former Alabama standout T.J. Simmons. At Texas, Bennett worked with Joe Wickline, father of current Mountaineer Kelby Wickline.

As the summer offseason looms, Bennett, Coach Brown and the rest of the staff will continue developing this new era for Mountaineer football. While 2019 may be a year of low to moderate expectations, improvement will be a necessity for this team. If Bennett is right, work ethic for those in charge should not be a problem: “You’ll never see this staff shy away from work,” says Bennett.

Episode 114 of MetroNews’ “Three Guys Before the Game” Podcast