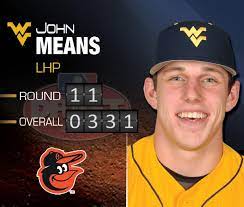 WVU hired Randy Mazey in 2013 to be the head coach of the Mountaineer baseball team.  At the time I didn’t really follow Mountaineer baseball because they never made much noise.  When Mazey came in that changed.  The first thing he did that I liked was changing the logo of the team to the familiar WV flying logo that adorns all our other sports teams.  So, I started paying attention and the Mountaineers began making noise.

That noise began with the pitchers and one of those pitchers was John Means from Olathe, Kansas who played for Mazey in 2013-14.  Mazey obviously has an eye for talent, as is proven by his success and how WVU players are no longer unheard of in Major League Baseball.

Last night John Means had one of those games that explode players in the press after throwing a no-hitter for the Baltimore Orioles.  Once a player throws a no-hitter it’s as if they are forever known as a special pitcher that enters a realm of baseball lore that few, even great pitchers, attain.

The last Oriole pitcher to toss his own no-hitter is a legend in baseball known as Jim Palmer.  As a kid growing up in West Virginia everyone knew who Jim Palmer was and everyone followed him.  When would he pitch his next no-hitter?  However, it didn’t matter if he ever pitched another one again, because once one is attained it can never be taken away and you’ve already become a baseball immortal.  The one Palmer threw on August 13, 1969, was his only one, and it’s the last thrown by a single Oriole pitcher until John Means of West Virginia University tossed his own near-perfect game last night. 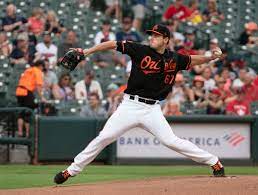 What will the rest of his career be like?  No one knows, but what we do know is everyone will be watching for the next one because as you can see, they’re rare.  It had been 52 years since an Oriole pitcher had thrown a near-perfect gem.